I think there is a growing sense that MFL teachers spend too much time introducing new vocabulary. It's the kind of thing MFL teachers have been doing for years: present vocab / choral repetition / individual repetition / selective repetion such as repeat if it's true / what number is it? / is it A or B? / what's missing? / playing simple games in front of the class with the vocab, etc, etc. I'm sure all MFL teachers are familiar with this sort of thing. Lots of singing and dancing at the front of the class & lots of noisy repetition from students.

Vocab mats etc are used by some to avoid the need to spend so much class time presenting new vocab: give them the vocab and spend class time actually using the vocab constructively and creatively. Some teachers even insist that their students should learn the vocab before they get to the class, which has the double advantage that (a) class time isn't wasted presenting vocabulary and (b) students don't have to constantly refer to vocab lists or vocab mats. The trouble with this is, how can you proceed with the lesson if the students haven't done their homework?

I've recently been looking into the idea of using dual language texts. These allow students to see for themselves, and in context, what the language means and how it is used. It occurred to me that a variation on dual texts has also been used by MFL teachers for years: the "Find the French in the text for..." exercise. These kinds of exercises are often called 'discovery' exercises, as the teacher is providing the students with a means of discovering new meanings / vocab / structures themselves. They are a good way of presenting new vocabulary and structures in context, building on students' prior language knowledge.

Also, because you're providing the students with all the language they need, they can hardly use the excuse that they don't understand the text.

I decided to try out the idea of using the Find It! feature of TaskMagic3 as a sort of dual text. In this case, I'm not presenting the 2 texts side by side. The French text is in one block, and the students are asked to "Find the French" for the phrases provided. By presenting the French to be found first as longer sentences, then as ever-decreasing chunks of text, you encourage the students to focus on the the meanings of individual words and groups of words, on the building blocks of language. They end up with their own vocab list and (hopefully!) an understanding of how the smaller blocks fit together to make the bigger blocks. This should help them when it comes to using the language for themselves...

See the examples below, which are all pdf worksheets, which anyone can print (or view in fullscreen?). These were printed from TaskMagic3 using a free tool called doPDF http://www.dopdf.com which adds the facility to print to pdf to your printers list. The first pdf is the Find the French pdf based on the dual text idea.

See this video tutorial on creating a Find it! exercise in TaskMagic3 Mix and Gap:

All the other pdfs are practice activities at varying levels which can be used for lots of extra practice. 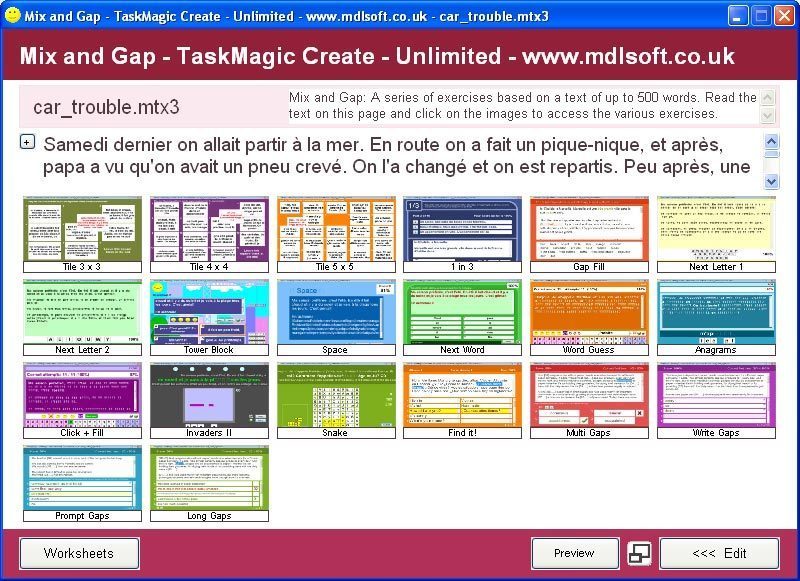 If you have TaskMagic3, click here to access the Mix and gap file. See also the hundreds of ready-made TaskMagic3 files at http://www.mdlsoft.co.uk/readymade.htm

If not, you can get a trial download from http://www.mdlsoft.co.uk/trialdownloads.htm

Click here for more details of the Mix and Gap component of TaskMagic3.

SEE THESE DETAILED VIDEO TUTORIALS on all aspects of creating your own Mix and Gaps files to exploit texts of all sorts in TaskMagic3.