If so, have you thought about using TaskMagic to create interactive activities like those below to use with the whole class or teams? 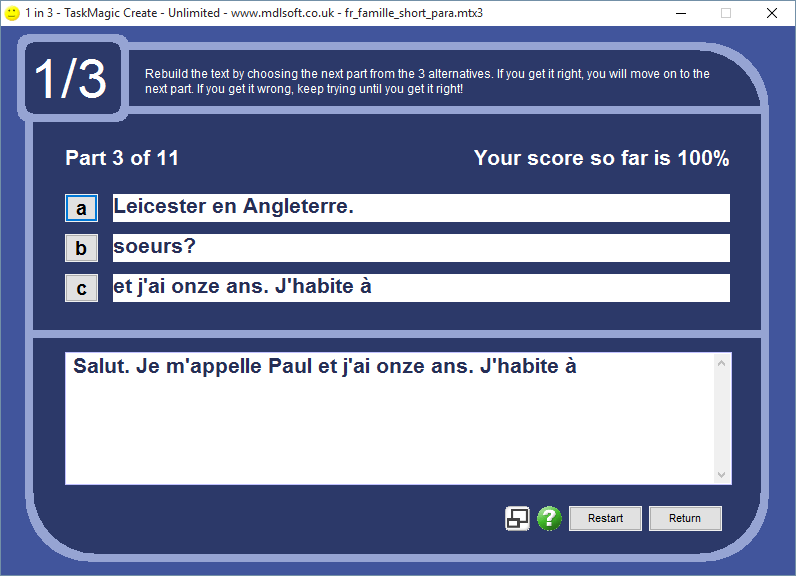 A TaskMagic3 10 user licence is like MFL-focused interactive whiteboard software for a dept of up to 10 teachers (or share it outside the dept, why not?) for less than £25 per teacher.

AND that's a ONE-OFF payment. NOT a subscription.

AND it prints off a whole load of worksheets too.

(And because it isn't web-based, you don't need to rely on an internet connection :)

Making match-up games and activites for PCs and IWB

Making literacy and text-reconstruction resources based on texts

Making verb conjugation games for PC / IWB (and worksheets too)

Making picture and text match-up games for your IWB

Ready-made TaskMagic3 resources (for those who have TM3)

The average UK secondary school has about 900 pupils.

That means that the average cost per pupil of buying a school licence for TaskMagic3 is about 45p.

And that's for a perpetual licence. So if you use TaskMagic for, say, the next 4 years, it works out at just over 11p per pupil per year.

And that includes the ability to create a wide variety of engaging interactive resources for use with interactive whiteboards or projectors, or with suites of PCs or school laptops, as well as a wide range of worksheets....

...as well as for non-language subjects, especially (but not only) for SEN and literacy work.

11p per pupil per year - based on average sized school buying a site licence and using it for 4 years.

And an upgrade to TaskMagic3 costs half the non-upgrade price.

So OK, TaskMagic only works on Windows computers, not Macs. Not on ipads*. But you can't argue with those prices, can you?

[*By the way, a licence to use TaskMagic3 on every computer in the school costs roughly the same as one  (1) ipad.]